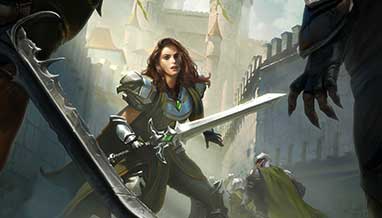 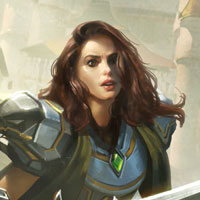 The gates had to hold! Lieutenant Relia of the Crownwatch grimaced. Any other day, she would have been up at dawn, briefing her sergeants and overseeing the day’s assignments before heading to the training grounds to teach the rookies how to think and fight on their feet. But this wasn’t a normal day. The enemy was on their doorstep.

Let’s just get on with it. The Crownwatch had been in their defensive lines all morning, waiting. They’d stood in tense silence as the sky darkened with stormclouds, listening to the Clans work themselves into a battle frenzy beyond the walls. As the chants grew louder, Relia turned to reassure the infantryman to her right with a hard smile. This would be his first time seeing combat, and he looked a bit gr— lightning tore through the sky, shattering the gate in a roar of primal fury.

Before she even felt the sting of splintered wood, Relia heard herself shout, “Shields up!” Arrows rained down and the horde poured into her city. 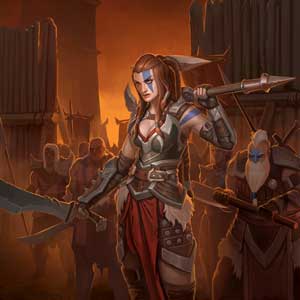 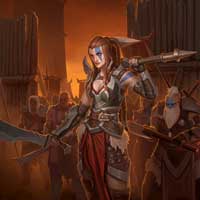 The fighting was a cacophony of bellows, drums, horns, and the crash of metal on metal. The Clans attacked without discipline, a relentless wave of spears, axes, and magical blasts. Relia cut down a mace-wielding berserker and felt a surge of pride as she saw the line of emerald capes and gleaming armor turn back the initial assault. There was little time to celebrate, however, as fresh foes joined the melee.

“Hold the line!” Relia barked, stepping back and raising her shield. But there was no one to her right for her to lock shields with. Relia turned to see the legionnaire who had stood next to her just a moment before, fleeing . He wasn’t the only one. As the Clans swarmed into Argenport, terror gripped many of the recruits and conscripts and, one by one, they ran.

The gate must hold. Relia turned, tightening her grip on her sword as the enemy charged again. 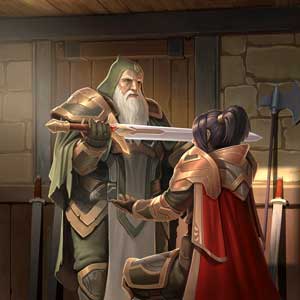 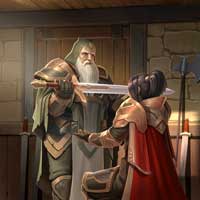 The choice to enlist had been a simple one: Relia wanted to help. She wanted to make her city better. The Argenport she had known was vibrant, a beacon of wealth, power, and culture. That was the city and the people she loved. The moment she was old enough, she had joined the Crownwatch, doing her part to keep Argenport safe.

There was a time when the Crownwatch would have marched out to meet any threat. But the Crownwatch at the gate this morning was a shadow of its former self. Worse yet, the devastation hadn’t started with battle today, but the rebellion. Relia had watched, horrified as green hellfire roared through half the city, consuming rebel , soldier, and civilian alike. The city had survived, victorious, but it was a victory tinged with mourning.

She found herself in that part of Argenport now, a burnt, rubble-strewn scar that had not yet been rebuilt. Relia was exhausted. Her armor had been dented and beaten, and her left arm was numb from a blow that had shattered her shield. The Crownwatch had fallen back and fallen back, trying to slow the endless waves of their attackers, until there was no one left and nowhere left to turn. Now barbarians rode through the streets unopposed.

First Rolant and the rebellion, then the Cabal and their crimes , and now Eilyn had returned to savage the city.

Why would you fight to protect something that seemed so determined to harm itself?

Clan horns echoed through the smoke-choked alleys as Relia let her dented helm clatter to the cobbled street. The fighting that morning had been desperate, but the roar of the early battle had by now given way to the rough sounds of individual skirmishes and the cries of the wounded and dying. Her hair was matted to her skull with sweat and blood from a shallow cut above her eye. When did that happen? Relia’s shoulders burned at the thought of raising her sword again, but her grip remained tight. Everything hurt, most of all the knowledge that they had failed: the city had been taken.

'It Only Takes One'

Shouting. There: In the ruins of a storefront half a block away, a family cowered; two brutish Clansmen looming over them. Relia’s training and her oath carried her forward without hesitation, her muscles screaming under the weight of her armor. It only takes one, she thought, Just one to stand when the others falter. Relia charged, her pauldron slammed into a startled barbarian’s ribs, sending him sprawling. The other one cursed, turning to slash at her with a hatchet. Relia slapped the strike aside with her blade, opening up a sharp cut across his chest. The barbarian roared in pain, landing a heavy blow on her jaw.

She staggered back, but kept her sword raised. The barbarian charged, consumed by his fury. Relia stepped past another wild blow and sank her sword into his chest. His dead weight tore the blade from her grip, wrenching her arm sideways with a sickening snap. She danced backwards as the first warrior came at her with his sword . She raised her broken right arm, crying out in pain as the blade scraped along the edge of her gauntlet. Before her attacker could recover, she launched herself forward and felt the crunch as her forehead met his nose. He hit the ground again, and Relia kicked the sword away from his hand with an armored foot. The man considered his options, spat, and fled. 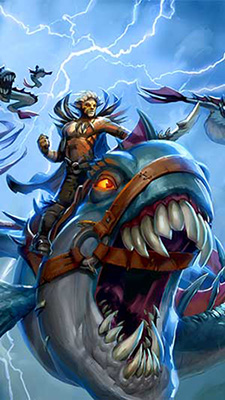 Relia turned to the family in the doorway, their eyes wide.

“I thought the Crownwatch was broken,” one of the men said, holding his husband and daughter close.

“Not everyone,” Relia panted, wiping blood from her face. Not yet. “Find somewhere quiet and safe.” The man nodded, and they ran.

The sky above the Spire churned with serpents. Even the valkyrie have withdrawn. Fires throughout the city lit the clouds overhead in a furious orange. Argenport had fallen. In the smoky distance, a woman screamed.

Relia clenched her fist, wincing as pain radiated up her injured sword arm. She’d never be able to lift a blade, let alone fight. She looked up the street and caught a brief glimpse of the shopkeeper’s family ducking into an alley. “It only takes one,” she said aloud.

Then she picked up her sword with her left hand. Its weight felt strange, awkward. It will do. It has to.

She ran towards the fighting. 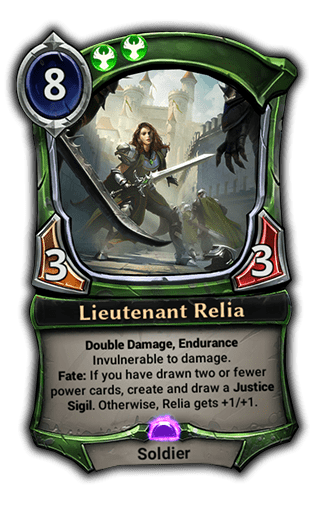 Remember: It only takes one…win each day to earn some new cards!