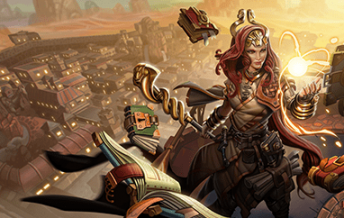 In an update this week, the Redraw rules and Destiny rules will be changed:

The Destiny mechanic has been modified for improved play experience and rules consistency. Now, when a player at the unit cap draws a unit with Destiny, they will discard it and draw another card, instead of playing it and being prompted to sacrifice a unit.

The Destiny mechanic can lead to dramatic swings, but when a large number of units with Destiny were played in succession, the pacing of the game was slowing down to an unacceptable degree. While this rules change has a minimal impact on most cards, it impacts Talir, Who Sees Beyond in a meaningful way. As such, we are making an exception and offering full-value sellbacks on it, despite no change to the card itself.

Additionally, given the success of the test of the redraw rule changes in the Feastcalling event earlier this month, the “desperate gambit” redraw will be introduced to Ranked, Casual, Draft, and Friend Challenge games. The change will go into effect for next month’s Sealed league when it begins on December 1.

Starting hand and redraw hand distributions are unchanged; however, the redraw rule is being modified to include a second option for players that chose to redraw. This “desperate gambit” redraw is a measure of last resort that allows the player to shuffle their redrawn hand back into their deck and draw a final hand of six cards (still containing a one-third chance of two power, a one-third chance of three power, and a one-third chance of four power).

How will these changes shake up the meta? Join us this weekend for ECQ: Defiance to find out!