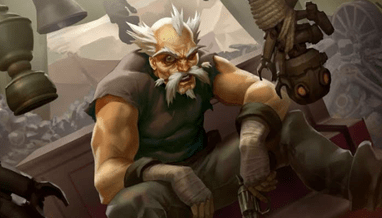 They were always talking to him, his friends. This morning was no different. 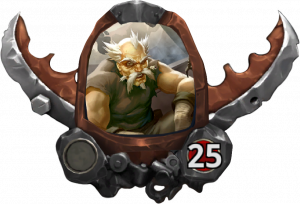 Daylight streamed in through missing shingles, pooling on shelves groaning with an eclectic assortment of items. This was the first time in months that some of them had felt dawn’s rosy touch. The moment was marred by muttering from the back room, 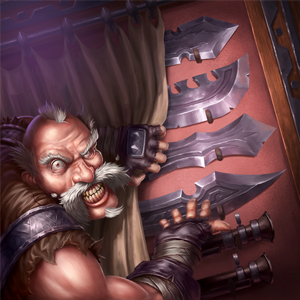 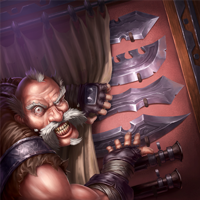 “Is this you? No, nonono! Where are you hiding?”

The junk shop had been there, with a sagging roof and in need of a paint job, for as long as the citizens of Argenport could remember. And as long as it had been there, it had been run by its cantankerous proprietor, Wyatt. The shop was as organized as his mind, all full of rubbish and sharp edges.

Shaking an accusing finger at a nearby heap of scraps, Wyatt gathered a bundle of loose grenadin parts and hurled them out an open window. The noise shattered the quiet morning as they clattered to the cobblestone outside.

“Can’t make deals on a weekday without my lucky boot! Otherwise they’ll get me.”

Like most of the city, the junk shop had been damaged by the recent fighting, but the Queen's reconstruction efforts that swept the city like a spring cleaning had somehow passed by Wyatt’s storefront. His neighbors, too, avoided the place. Wyatt kept cracked and rusted “heirlooms” in a locked glass case, to separate them from the assorted treasures heaped in precarious, unorganized piles. And as years passed and the piles grew, the man never seemed to age, only growing more eccentric and paranoid.

Wyatt seized a large, sulfurous rock sitting on a low shelf and pressed it to his ear, bushy eyebrows furrowing.

“That Amaran fellow I bought you off of said you contained a mighty beast. Well? Bah! Could use an extra hand around here.” 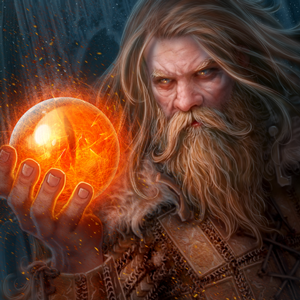 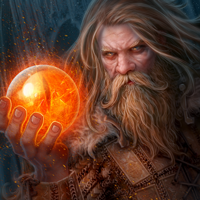 Worse still was the experience of purchasing something from Wyatt. He never wanted coin, and was insulted when anyone offered. Instead, he always seemed to have an eye on something of yours; a precious ring, or a favorite hat. He was more interested in conversing with a customer’s things than with any prospective buyer. Many people gave him what he wanted just to be quit of his company.

“Tarnation! They’re after me, and I can’t have it!” Wyatt shouted, kicking the shelf. A large orange sphere rolled off, kicking up a plume of dust as it hit the floor with a dull thump.

“Don’t look at me like that,” Wyatt groused. “Gotta have the right tool for the right job, and this job needs boot!”

He would regularly close up shop in the middle of the day, scuttling away on errands and ‘little ventures’ with a mad cackle. Sometimes he was away for days at a time, but he inevitably return, his pack bulging with odds and ends. 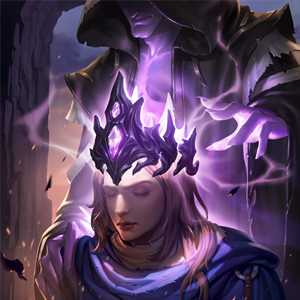 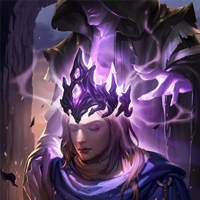 “Aha! There you are!” Wyatt’s hand darted out like a snake, snatching a worn and stained leather boot off a small pedestal. The stand was clear of other clutter—a remarkable fact in Wyatt’s back room—and on it sat a warped metal crown. The crown rocked as the boot was pulled off, and for a moment the sunlight in the shop seemed to darken. As purple light leaked from a pale gem at its center, the crown spoke:

The words slid around the room, echoing far longer than they should have. After they had faded and light returned to the dust-choked room, Wyatt licked his lips and glared at the headpiece.

“Lookee here, you jes’ need to wait yer turn like everyone else in here. Now hush.”

Muttering to himself, he jammed his boot on and stomped out of the room, pausing only to grab a small case from a creaky hatstand. When he reached the front door, he turned around to wave at the dark, dusty room.

Dust rained down from the stained ceiling as Wyatt slammed the door, leaving his friends in the quiet half-darkness of late morning.

It was over an hour before the whispering began. 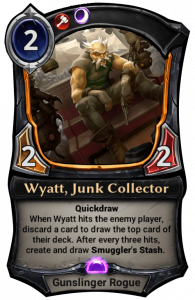 What will Wyatt help you find? Start looking today, and earn some new promo cards!